What is an engine cooling system?

Why is my car overheating? Most gasoline or diesel-powered vehicles run on a heat engine called an internal combustion engine (ICE).

How does the engine cooling system work?

First, let’s take a look at the various components that make up a car’s cooling system.

The main task of the radiator is to lower the temperature of the coolant flowing through it. This hot fluid comes from the car’s engine. The radiator has a vast surface area and transfers heat from the coolant to the atmosphere.

The thermostat matters more when it comes to coolant flow to the engine. The main thermostat valve will be closed with the engine idling or cold.

Antifreeze is a mixture of glycol and water. Coolant has a lower freezing point than water. If water is used instead of coolant, it can freeze, expand, and cause engine wear on cold days.

The ECT sensor is what it claims to be; it measures the temperature of the coolant. We have an idea if the engine generates too much heat or not. The water pump is connected to the machine to run it. Pump the antifreeze mixture throughout the vehicle’s engine cooling system.

The coolant expansion tank regulates the pressure in the system. It also helps relieve the tension built up in the radiator. Almost all cars have an expansion tank. 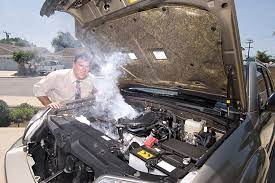 How does a car engine cooling system work?

A thermostat is essentially a valve. In addition, the thermostat also detects the temperature of the coolant.

The coolant will be good cold when you first start the engine. Therefore, the coolant will flow directly to the machine (bypassing the radiator). Thus, the engine begins to run and warms up in a short time. As well as engine coolant.

The radiator will absorb excess heat from the coolant and release heat energy into the air. Meanwhile, the cold coolant from the radiator returns to the engine.

What happens when the coolant in the radiator heats up?

The fan lowers the temperature of the coolant in the radiator. The result is that this feedback loop moves back and forth in an endless loop as long as the motor is running. Thus, the coolant will flow to the engine from the radiator and return to the radiator from the car engine. Also, we should mention that liquids tend to expand and heat up in a closed system like this one. Coolant is no different.

Your car’s cooling system consists of many components that complement each other. With a complication in one of the components, the entire system’s functionality is disrupted. Like any other system, it will inevitably depreciate. When there is a problem with your engine’s cooling system, it can overheat and give you a real headache. The antifreeze mixture in the cooling system passes through multiple valves and hoses.

If any cracks or cracks appear on any of them, the coolant can leak out, and the engine will eventually overheat. You can try to identify this by the sweet smell that may come from the front of the car. The coolant level in the system may drop. But once the coolant is filled, the engine will cool down.

However, remember to use the correct antifreeze mixture for your vehicle. In addition, you should be careful not to confuse the proportion of water with antifreeze or use a different type of antifreeze.

In any case, you will have other problems with the engine. Your car’s thermostat may be damaged. If one of the thermostat valves is not opened in time, the coolant will not reach the engine or flow to the radiator. So the machine will probably overheat.

As a result, the engine overheated. Something could have broken the water pump or the coolant pump. Coolant flow throughout the system can be blocked if debris builds up in the pump. The engine will definitely overheat if the coolant does not flow well.

If the temperature gauge on your dashboard tells you that your car’s engine is overheating, don’t move on. Also, if you see telltale signs like smoke coming out of the hood and if you decide to continue driving, you risk severe engine damage. The best solution is to take the car to a service centre and check the engine.

Get More For Your Money With Uber Cash