What all should you know about Black Friday Crypto Crash?

What is the Black Friday Crypto Crash-Total market losses in the last 24 hours have reached $137 billion, and here are the possible reasons why this could have happened.

First, the market saw a massive fall in price, with Bitcoin losing almost 10% of its value in just one day. The interest rate hike by the US Federal Reserve also had an impact on the market. Secondly, some investors were afraid of the possible regulations that could be coming up in future and decided to sell off their holdings with more than $6 billion being sold during this period.

Today, the market witnessed one of the highest one-day liquidations ever, with approximately $880 million in liquidations recorded since the market opened at the time of this report. The leader in this was Bitcoin, which placed contracts worth about $175 million. This is one of the main driving factors for market crashes. 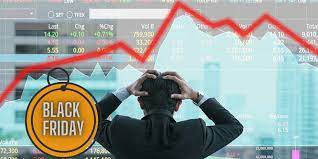 Even in the past, with each significant liquidation, Bitcoin created giant red candles, with cascading effects on other markets related to the welfare of citizens and their sovereignty over monetary policy, driving the ban. Since the Chinese ban, this has been one of the most significant blows to the global cryptocurrency market. Russia is the world’s third-largest bitcoin producer, raising environmental concerns.

The US stock market has had a significant impact on the cryptocurrency market in the past and, for the same reason, it would not be surprising if this happened today. The S&P 500 lost almost 4% in 72 hours.

Also, since Bitcoin and SPX have a correlation of up to 0.59, the dips must have influenced each other, and they likely did.

And the best coins?

When writing this report, virtually all of the top 10 cryptocurrencies are within 10%, with bitcoin losing nearly 7.83%.

Ethereum, on the other hand, while not losing its critical $2,727 support, is trading at $2,789 right at the time of this report, down more than 11% on the day. Finally, the world’s largest cryptocurrency exchange’s Binance Coin (BNB) token also lost about 11.32% but was thankfully trading at $418, far from its critical support of $399.